THE place for your Sisters-related comments, questions and snippets of Sisters information. For those who do not know, The Sisters of Mercy are a rock'n'roll band. And a pop band. And an industrial groove machine. Or so they say. They make records. Lots of records, apparently. But not in your galaxy. They play concerts. Lots of concerts, actually. But you still cannot see them. So what's it all about, Alfie? This is one of the few tightly-moderated forums on Heartland, so please keep on-topic. All off-topic posts will either be moved or deleted. Chairman Bux is the editor and the editor's decision is final. Danke.
Post Reply
47 posts 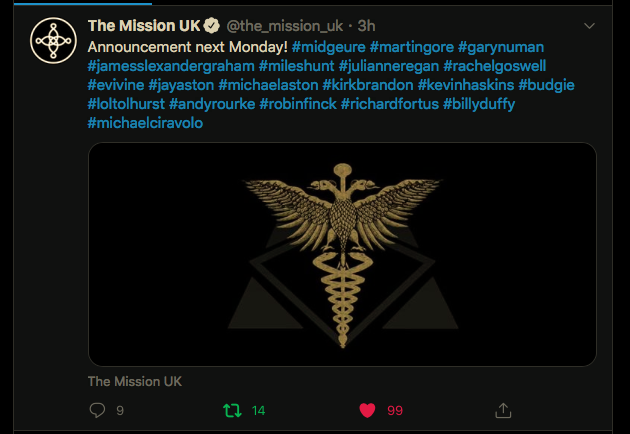 He managed to get both Astons to do it? Blimey, he might as well have chanced his arm and asked Eldritch while he was feeling lucky!

The delightful Ms Regan too

Must be something about bands with members called Jay Aston that end up with two different factions feuding over the name.

The Buck's Fizz one is some lunatic Brexit enthusiast now, I think.
Top 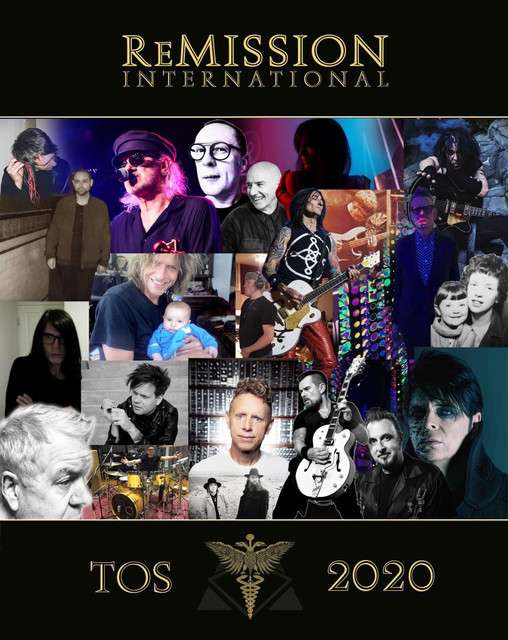 I had to double-check to make sure it was Martin Gore and not Pista.

All revealed on Monday folks.
....if I have to explain, then you'll never understand....
Top

He's not impersonating me again is he?
I'm calling my lawyer
Cheers.
Steve
Just like the old days
TheCureCommunity

Wow. Lockdown has been tough on some people

The wait is over and we are thrilled to launch Wayne Hussey and friends remake of the classic Mission anthem ‘Tower Of Strength' in support of key workers dealing with Covid-19 globally.
All proceeds go to charities personally chosen by each contributor to TOS2020.

For full details and all pre-order information please visit the TOS2020 website: www.themissionukband.com

Watch a short teaser clip of the song: https://youtu.be/Wf8cd_3zoWY

There are also bundle options available so you can give full support to the nominated charities (listed below) plus an option to donate a little more if you are feeling like you'd like to give more to these very worthy causes.

All bundle versions include an additional re-mastered version of the original Tower of Strength exclusive to online orders.

From Wayne Hussey: “When Covid-19 hit I started receiving messages asking ‘why don’t you re-issue Tower Of Strength for the front line workers?’ The song had apparently been adopted as an anthem by some NHS workers, and it got me thinking that I would like to contribute something to the greater cause at this unprecedented time and the only thing I could really contribute is music. So in conjunction with my good friend Michael Ciravolo, I came up with the idea of recording a new version of Tower Of Strength for charity by enlisting the help of musician friends and acquaintances. Tower Of Strength was first released by The m*****n as a single in 1988 and then again in 1994. It charted twice in the UK top 40 and has proved to be probably our biggest song and the one we generally close our shows with. It is anthemic. I wondered if recording a more well known song might have a greater reach but neither Michael or I could come up with any suggestions that seemed to fit lyrically without getting too corny. So Tower Of Strength it was then.”

“Usually I detest things that are done for charity that are also self-serving, but I came up with a plan that satisfied my conscience. I spoke with my fellow Mission band members who co-wrote the song - Craig Adams, Mick Brown and Simon Hinkler - and we agreed to give up any publishing income generated by the new version to nominated charities, including mechanical and performance royalties and 100% of any revenue raised by sales. TOS2020 has been renamed to divert funds from the original version, and the charities have been personally nominated by the people involved in its recording and release. Because the musical contributions are global our idea is that the proceeds will be divided and distributed equally among all the beneficiaries.

Whilst all the versions will be available to listen to on all streaming platforms I'm gonna ask you to help the cause by buying at least the digital package which is priced at only £2.99. It's not much, is it? For the price of a coffee you'll receive all five versions. Come on, help us to help others.” Wayne Hussey, Sao Paulo, Brazil, 9th August, 2020.

Produced by Wayne and co-produced and mixed by Tim Palmer except * remix by Trentemøller and ** by some bloke named Albie Mischenzingerzen.

viewtopic.php?f=8&t=27798
What’s the difference between a buffalo and a bison?
Top

Thanks for the clip, Quiff. It confirms that this...product...is every bit as subtle and nuanced as one may have expected. I suppose that, if it raises money... no, f**k it. Bad is bad and money isn’t an antidote.


The clip is a bit short to really get a feel, but it seems to be a bit "do they know it's xmas" from the 30 seconds I heard.
Cheers.
Steve
Just like the old days
TheCureCommunity

Well an ensemble rendition of ToS was always going to be a bit "Band Aid" wasn't it. At least that there Mischenzinger chappy got off his arse and did something , doubtless to some it was for all the wrong reasons and to others it was god-like genius. Personally I'm glad to see some royalties helping music based causes too.
....if I have to explain, then you'll never understand....
Top

The clip in no way does justice to the complete song and I'm told the Trentemoller mix is a radical reworking.
Top

Scardwel wrote: ↑
12 Aug 2020, 18:22
The clip in no way does justice to the complete song and I'm told the Trentemoller mix is a radical reworking.

I do hope that's the case. But you're right. 33 seconds is not going to do many things justice TBH.
Cheers.
Steve
Just like the old days
TheCureCommunity

Swinnow wrote: ↑
12 Aug 2020, 18:18
At least that there Mischenzinger chappy got off his arse and did something

It was released today. BUY IT!
Top

Magnificent and as utterly stupid as ever, like all the best Mish things.
....if I have to explain, then you'll never understand....
Top

Here's the video thingy too....