Does exactly what it says on the tin. Some of the nonsense contained herein may be very loosely related to The Sisters of Mercy, but I wouldn't bet your PayPal account on it. In keeping with the internet's general theme nothing written here should be taken as Gospel: over three quarters of it is utter gibberish, and most of the forum's denizens haven't spoken to another human being face-to-face for decades. Don't worry your pretty little heads about it. Above all else, remember this: You don't have to stay forever. I will understand.
Locked
23 posts • Page 1 of 1

OMG! What a week for English football! In the Europa League Arsenal cruised through fairly easily to the final. Chelsea had to work a bit harder to get there, and in any other week, their win would have been the talk of the day. But first Liverpool stuff Barca 4-0 by refusing to let them play (which Barca will have seen as very rude). Subs rule, Klopp rules, the players, the Kop, the city and YNWA all ruled - for 24 hours. Spurs take to the field with less of a chance even if they are only 1-0 down, not 3. Liverpool have after all done it before, Spurs have wobbled lately and even I can't say they're in the same class. They were also away. And 2-0 down at half time. Hope was very very faint. Even at 2-2, it was barely alive. But.. but... Lucas Moura... I'm still welling up now, and my 96th minute yell as the ball crossed the line still has the cat looking wary when he hears my voice. As he was sitting on Mr Strange's lap at the time, I fear that the scars may take a while to heal. So the stress continues...
Indeed it does, for Liverpool, with a dose of doubt for City, in the last, final, ultimate and very much the last GW. Here's the line up.

Brighton v Man City Much as I appreciate City, I really want Liverpool to win something, and not against my team in the CL if at all possible (though I fear). Come on Seagulls!
Burnley v Arsenal Likewise - Arsenal need Spurs to cock up big and give an 8 goal GD away to steal the 4th CL place. GO BURNLEY
Crystal Palace v Bournemouth I'm warming to Palace, but Ake is ace.
Fulham v Newcastle I'm expecting this one to be the best game of the GW
Leicester v Chelsea Chelsea could well slip up here after a long game.
Liverpool v Wolves Liverpool riding high. I think Wolves will give a good account of themselves but won't get past the exhilarated Reds. Salah and Robertson may pop in - tis the last home game after all.
Man Utd v Cardiff Oh Lord. Who cares any more?

Southampton v Huddersfield Huddersfield, for a change.
Spurs v Everton Spurs need a point to be sure. They might be a bit tired! Will Kane have a run out? His ankle held up in the celebrations!
Watford v West Ham I prophesy disaster - red cards?

Whatever happens, it will be full of excitement for fans and neutrals alike. Not sure I can take much more - I've been on the edge of the sofa for so long recently that my bottom has a groove in it.

Rally the troops for the last time, Captains. The Final Battle is upon us. May your Gods of Football hear your prayers.

Interestingly they played Tower Of Strength at Anfield just before kick off on Tuesday.
....if I have to explain, then you'll never understand....
Top

It only seems five minutes since we all had high hopes of a great footie season (fantasy and real). Thanks to Em and Steve for taking the time to keep us well informed, kicking our butts and making it fun.

Iâ€™m ready to watch my Derby team beat Leeds in the play-offs so I can see them in premiership next season. Mind after their last effort perhaps we might be better still in Championship.

Palace at home?
That's going to be littered with dammits isn't it?
Cheers.
Steve
Just like the old days
TheCureCommunity

of course it is!
I just can't keep living on dreams no more
Top

Liverpool attacking the Kop end in the first half?

Citeh 3-1 up.
Not looking good for Liverpool now

Congrats Citeh, onwards to Spain
....if I have to explain, then you'll never understand....
Top

Maureen is a busted flush, my cat would have had enough sense not to sign Pogba to further inflate the egos of the young ted's at Utd and destroy any semblance of TEAM. Admittedly a Merseyside upbringing has inflicted an irrational hatred of Manchester United on me, but even I pity them Mourinho.
....if I have to explain, then you'll never understand....
Top

If the PL have him back, I'd be very surprised
I just can't keep living on dreams no more
Top

It's all gone. No more league football this season. None until August.

It's sad enough - but when it really sinks in, anguished cries will rise to the heavens - 3pm Saturday, I reckon. Playoff finals still to come (Mike Dean supporting Tranmere from the stands is a wonderful thing), the FA Cup Final, and the Women's World Cup (England in with an excellent chance).

Brighton 1-4 Man City Seagulls went ahead via Murray for about a minute. Then normal service resumed from City with Mahrez, Laporte, GundÃ¶gan and AgÃ¼ero chipping in with goals. Of all fixtures to play at the finale, City couldn't have asked for better. Brighton sacked Chris Hughton next day, and Kompany looked very much like a man not wanting to say goodbye.
Burnley 1-3 Arsenal Aubameyang ended a great season in style, claiming a share of the Golden Boot with two. Burnley ended up safe, Arsenal not in the CL places, but still not bad considering the ups and downs they've had. See, I managed to say that nicely.
Crystal Palace 5-3 Bournemouth Good Lord. Everyone had a hand in this one. Zaha with 3 assists - is that the most this season? Batshuyai! A brilliant acquisition.
Fulham 0-4 Newcastle Fulham end ignominiously as Newcastle spread their wings. So much money spent - wisely, but not well.
Leicester 0-0 Chelsea Wasn't expecting a stalemate here!
Liverpool 2-0 Wolves Wolves harried and pushed, but just couldnâ€™t keep Liverpool out. ManÃ© and Alexander-Arnold ran the show, but a real team effort. Full kudos to both teams. ManÃ©â€™s two gave him another share of the Golden Boot, Salah taking the last.
Man Utd 0-2 Cardiff No one saw this coming at the beginning of the season. MU in complete disarray, Cardiff relegated but coming out with a lot more dignity. There will be a lot of changes at MU very shortly, imo.
Southampton 1-1 Huddersfield I donâ€™t think this looked like anything else, but hope tried to spring.
Spurs 2-2 Everton Worrying though it was, a draw was good enough for Spurs to take the last CL place. Dier and Eriksen v Walcott and Tosun.
Watford 1-4 West Ham Holebas indeed sent off and now not in the FA Cup final. The Hammers dominant though, Noble taking the plaudits and both goalies busy. &#8232;

So, despite all the wishes and hopes, City took the League title by one point. Not so unusual or unlikely, tbh, but this season was different. Both first and secondâ€™s points score and general records were impeccable and either would have been worthy winners. My heart was with the Reds, but itâ€™s been with the Blues in less emotional seasons. I canâ€™t remember any year being so full of drama, skill, excitement and excellence. Roll on the next one!
Anyway, enough of Real Life. Fantasy is our life. Weâ€™ve had a season and a half ourselves. Our trauma and despair went past any rational fan, because they only have one team - we have all of the buggers to cope with. In our own world league we have our own results.

In this GW, Thor Your Foot BC are hailed by the Big Shout Out for 81 points. Well done!

Overall winner by way of superb spreadsheet work beyond our ken is Dead MEn Walking, who has worn the Yellow Jersey for so long that it might better if he kept it anyway. Respect to you, Sir.

I donâ€™t think it would be any surprise to anyone to find that BB&S ran away with it, winning by a very large indeed 1,371 points. EIB were second, with IGM puffing up in the rear despite a bit of a rally every now and again.

Over in the H2H, the Crown belongs to The Clash Wednesday.

The team rankings are as the main league but a lower points difference!

An even more special mention to Steve and Graham for doing all of the hard record keeping mathsy stuff - I'm just the IGM front girl for the work they do. Thank you, lads, from the bottom of my black little heart and the very back of the Batcave.

And here it is - What a beauty! Congratulations! 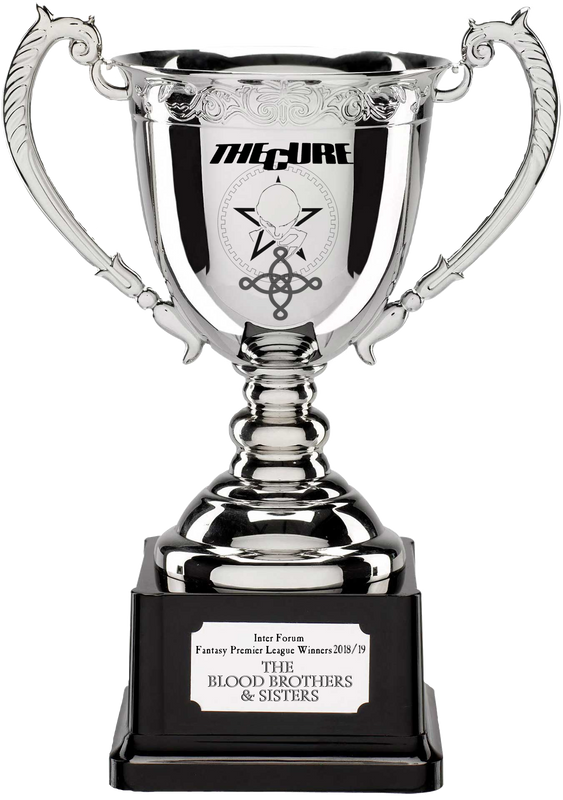 See you on the other side of the summer

emilystrange wrote:
An even more special mention to Steve and Graham for doing all of the hard record keeping mathsy stuff - I'm just the IGM front girl for the work they do. Thank you, lads, from the bottom of my black little heart and the very back of the Batcave.


Aww. Thanks Jo & thanks also to Graham for keeping my shoddy maths in order

Also a massive thanks to those who've played this season

2 Noob teams (Norwich & Sheffield UTD) already conformed for promotion & a shock for Leeds last night as Derby go on to the play off final with Villa.
I may have a look into the women's world cup & see if FIFA have a fantasy game for that.
In the meantime I'm keeping a vigil for Fort William hoping they aren't kicked out of the Highland League despite losing 32 of their 34 matches this season & finishing last with -7 points & a -224 goal difference

Maybe Big Sam can wade in & turn them around?

Righto, time to pack up the shed for the summer.

ROBBIE wrote:Just out of interest what does the Shed do during the summer? &#129322; I may have a look into the women's world cup & see if FIFA have a fantasy game for that.

I was going to mention that and forgot! We might be better at FWWC than at the men's one.

The Batcave could do with a summer declean, so will not be cleaning for a few weeks.

Do we get relegated to the second division then? And if so will we be playing a Rose Of Avalanche (etc) fanclub squad next season?

Personally my IGM season startred badly, got much better for a time, then turned to s... again. Not unlike a certain 'team' I support so art does imitate life. Fancy that.
Top